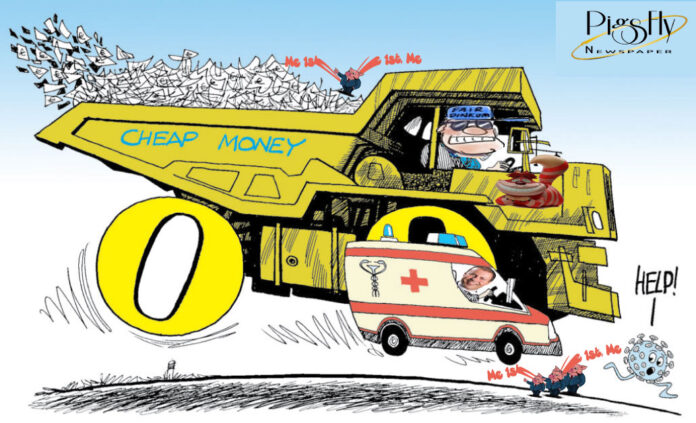 With Australia’s lived experience of global heating, you would think we’d have moved past grown men staging hyperbolic encounters with invisible things

If you’ve been paying attention over the past decade or so, you may have noticed that opponents of climate action in Australia spend a lot of time talking about things that don’t exist. Tony Abbott pioneered this technique by winning an election promising to repeal a carbon tax that never actually existed.

Abbott’s former chief of staff, Peta Credlin, is leading the authority on this point. Over to you, Peta. “It wasn’t a carbon tax, as you know. It was many other things in nomenclature terms but we made it a carbon tax,” Credlin said in February 2017.

For the record, Labor’s policy was a carbon price, not a tax. There’s a difference.

Abbott and Credlin flipping carbon pricing into a tax (abetted by the then Labor government that rolled over too easily on the nomenclature) was the core of the weaponisation of climate policy that continues to this day.

So every time one of the current generation of Coalition politicians utters the words carbon “tax” and Labor in the same sentence, understand this: they are lying, and worse, they are fully aware they are lying.

You’d think, with Australia’s lived experience of global heating – catastrophic fires and floods – we’d have moved past grown men staging hyperbolic encounters with invisible things, but during a 30-minute monologue that was heavy on the harangue and light on coherence, 2GB’s chief ranter, Ray Hadley, was back to a carbon tax.

Hadley clearly imagined himself setting up a campaign masterstroke. He asked Albanese whether he would repeat Julia Gillard’s now infamous pledge that there would be no carbon tax under the government he led.

Albanese shouldn’t have taken dictation from a shock jock. Given the whole encounter was entirely about Ray, boosting Ray, to Ray’s audience (and to whomever else might be interested … perhaps a prime minister Ray once asked to swear on a Bible, an impertinence that sent him to Coventry for quite some time) – the Labor leader should have told Hadley exactly where he could shove his dictation.

Stupid to gratify him. But in any case, this was an easy enough pledge to make given Labor has, 1: never implemented a carbon tax; and 2: has no intention of implementing one now.

Albanese uttered the words dutifully. We will have no carbon tax, ever, the Labor leader said. Thank God we cleared that one up.

As well as grinding away on the great nothingness that is the never-implemented carbon tax that will never be implemented, Scott Morrison and friends are now working up a new big scare for 2022.

You’ll be shocked, I know. This one involves a new carbon tax. Confusingly, this new Labor carbon tax was actually legislated many years ago by Abbott.

The new fake fight is about the safeguards mechanism which was implemented by Abbott after he repealed the carbon tax that wasn’t a tax. For the record: the purpose of Abbott’s safeguards mechanism was to cut pollution from heavy emitters. The then climate minister, Greg Hunt, always wanted to tighten the scheme, ensuring it delivered on its intended purpose, but that didn’t happen.

Labor says it will use the government’s safeguard mechanism (wait for it, hope you are sitting down, smelling salts at the ready) for its intended purpose. The 215 companies currently covered by the safeguards mechanism will have to develop plans to either reduce or offset their emissions in line with reaching net zero emissions by 2050.

For the record, both sides have exactly the same mid-century target and they are proposing exactly the same mechanism to reach it. The only difference comes with the trajectory – Labor has a higher target for 2030, which means these companies will either have to abate or offset their emissions more quickly.

And again, for the record, Labor’s use of the Coalition’s safeguards mechanism to achieve its intended purpose contains a further safeguard. The current policy says big polluters, like oil, gas and coal operations, will not face more stringent emissions reduction requirements in Australia than their competitors do overseas, which is why every big business group in the country has welcomed Labor’s policy.

Morrison could say Labor’s safeguards mechanism is effectively an elephant and the observation would be about as accurate. Perhaps he should try that? Mix it up a bit. Given words don’t have meaning. Axe the elephant. That elephant will wipe out Whyalla. Why not?

After branding his own policy a carbon tax, Morrison then falls back on his tried and true formulation. The Coalition will achieve net zero through technology, not taxes. What the prime minister fails to mention when he skips through that talking point is you, the voters, pay for that technology through your taxes.

Let me repeat: you are paying.

While much of the media has stampeded in the direction of the invisible elephant, demanding to know what Labor is hiding in a policy that has been in the public domain for months, one of the Coalition’s candidates, Colin Boyce, stood up in plain sight this week and pointed squarely at the elephant in the room.

Boyce, a National from central Queensland, told the ABC on Monday Morrison’s net zero commitment was a crock because it was just words.

This is verifiably true in the way Boyce said it. He said Morrison’s net zero “statement” was a flexible, non-binding plan that wouldn’t be legislated, and left plenty of “wiggle room”.

But there are two problems with Boyce’s truth-telling. 1: That’s not what Liberal candidates are saying in North Sydney, Wentworth, or Goldstein; and 2: it’s not what Morrison told the United Nations last year so that old mate BoJo would stop nagging him about saving the planet.

When the prime minister was called on this inconvenience on Tuesday, Morrison pretended Boyce didn’t say the 2050 commitment was a crock. “Our candidate was talking about how we get there,” Morrison said. “He wasn’t talking about the commitment itself”.

Actually, Boyce was talking about both those things. Using comprehensible words with readily understood meanings. Not a blizzard of talking points constructed on half truths and outright lies.

So what this all boils down to is the Coalition is pretending it has a strategy to bring down emissions in the city while Nationals disavow that same strategy in the regions, even though the Nationals signed up to the 2050 strategy in return for billions in infrastructure projects they are now flogging during this election campaign.

The Nationals leader, Barnaby Joyce, now declares he doesn’t like the word transition after signing up to a transition by signing up to a net zero target – unless Boyce is right of course, and the Nationals have signed up to nothing at all, in which case somebody better tell Dave Sharma and Trent Zimmerman and BoJo and the United Nations.

This excruciating abrogation of the national interest at taxpayer expense is accompanied by Morrison attacking Labor for harbouring secret carbon taxes to accomplish what are, on paper, near-identical policy goals to be pursued by the same mechanisms – a cynical bit of political brinkmanship, amplified fecklessly by boofheads like Hadley who are content as long as their ego is gratified and the outrage cycle is fed.

Presumably somebody else, at some future time, can clean up the mess.

Seriously, how much more of this can Australians take? I guess we’ll find out on 21 May.

This article appeared in The Guiardian

Katharine Murphy is Guardian Australia’s political editor. She has worked in Canberra’s parliamentary gallery for 15 years. In 2008, she won the Paul Lyneham award for excellence in press gallery journalism, while in 2012 she was a Walkley award finalist in the best digital journalism category.

Campaigner behind teal victory reveals his stunning next move

How does the government’s long-awaited anti-corruption bill rate? An integrity expert breaks it down

Paddy Manning paints a vivid portrait of a man born into...

Barangaroo is rubbish and now its wretched offspring are spawning across...

War crimes… deaths in custody… political corruption: is anyone powerful ever...

Bob Lee - November 9, 2022 0
Monopolists and rentseekers have been running rings round the democratic fiscal state for decades. It is obvious to everyone that the game is rigged....

Barangaroo is rubbish and now its wretched offspring are spawning across...

How does the government’s long-awaited anti-corruption bill rate? An integrity expert...

Monopolists and rentseekers have been running rings round the...
Read more
BUSINESS

Now that Rupert Murdoch is in his nineties, the...
Read more
ECONOMY

David Mason was the first person to give advice...
Read more
ECONOMY

Read more
Previous article
Losing interest in bank reform
Next article
‘This is a hose you have to hold’: Turnbull accuses Morrison of failure over China-Solomons pact