The COVID-19 emergency response plan has been activated in its initial phase since January 21. On Thursday, Mr Morrison re-launched it and asked authorities to identify “any gaps in capabilities” and elevate the government’s response to “the next phase”.

The government is preparing to respond to sustained coronavirus transmissions in Australia under pandemic conditions, known as “scenario two” in the emergency plan. Read the full Government Emergency Plan Report below. PDF download is available

The federal government has activated its emergency response plan to deal with a spread of the coronavirus locally, in anticipation of it becoming a “pandemic”.

It is also considering limited assistance for those hardest hit by the economic fallout.

Morrison stressed any measures would be “targeted, modest and scalable” – that is, able to be built on if necessary.

“We’re aware, particularly in the export industry, in the marine sector, there are particular issues there especially in North Queensland, but these problems are presenting in many other places,” he said.

The tourism and education sectors are being heavily affected as the crisis worsens. But the government has stressed universities have good liquidity to deal with the situation.

The travel ban on arrivals from China has been extended for at least another week. There will be no carve out for the tens of thousands of university students unable to reach Australia.

Treasury has not yet finalised an estimate of the economic impact of COVID-19.

Cabinet’s national security committee met for three hours on Thursday to discuss the latest information on the virus and what should be done now.

“What has occurred, in particular, in the last 24 hours or so as the data has come in is that the rate of transmission of the virus outside of China is fundamentally changing the way we need to now look at how this issue is being managed here in Australia,” Morrison said.

Stressing Australia had been ahead of the World Health Organisation in its previous response, he said “based on the expert medical advice we’ve received, there is every indication that the world will soon enter a pandemic phase of the coronavirus”.

“So while the WHO is yet to declare … it’s moved towards a pandemic phase, we believe that the risk of a global pandemic is very much upon us and as a result, as a government, we need to take the steps necessary to prepare for such a pandemic.”

The actions were “being taken in an abundance of caution,” Morrison said.

Health ministers will meet on Friday to discuss the emergency planning, to respond to a future situation where there is sustained transmission in Australia – in contrast to the present containment to a handful of cases. As the virus spreads internationally, the chances increase of a major spread in Australia.

The emergency plan covers special wards in hospitals, and ensuring key health workers have access to adequate protective equipment from the medical stockpile.

It includes provision for aged care facilities to be put into lock down if necessary.

There would also be contingency alternative staffing for key facilities if staff got the disease.

On another front, Border Force would if necessary extend screening to passengers arriving from multiple countries.

Morrison said consideration was being given to how school children would be protected.

The Prime Minister emphasised there was no cause to consider cancelling events or for people not to be out and about.

“But to stay ahead of it, we need to now elevate our response to this next phase,” he said.

“There are some challenging months ahead and the government will continue to work closely based on the best possible medical advice to keep Australians safe.”

So far, Australia had had 15 cases who had come from Wuhan and all 15 had now been cleared, he said. Eight other cases had come from the Diamond Princess. There had been no community transmission in Australia.

Governments may order mass vaccinations of entire suburbs, cities or groups of people; sports stadia may be sequestered as quarantine sites; and police could be ordered to guard critical medical supplies under Australia’s pandemic health plans.

Under worst-case scenarios being contemplated by state and federal governments, forecasts say a pandemic outbreak could last up to 10 months, and 40% of the country’s workforce could be sidelined by illness or caring for family members. Australia’s GDP could take a 10% hit.

The pandemic plans have not yet been scaled up to their highest levels: Australia remains in containment mode and governments have consistently said that Australia is well-placed to deal with any outbreaks.

Currently, out of 82,0679 confirmed Covid-19 cases worldwide, which have caused more than 2,814 deaths, just 23 have been identified in Australia, with zero deaths.

“Pandemic influenza can cause significant disruptions to the way we live as it has the potential to result in high levels of illness and death,” the Victorian government has warned in its action plan for influenza pandemic.

“The social distancing measures that may be required will have wide-ranging effects, with closure of schools and childcare services, and cancellation of public events. It is estimated that up to 40% of the workforce may withdraw from work at any one time due to illness, the need to care for family members or the fear of contracting the virus in the workplace or on public transport.

“One study estimated that in a worst-case pandemic influenza scenario, Australia’s gross domestic product could suffer a decline of greater than 10%.”

State and federal governments have had pandemic plans in place for years, prepared for the possibility of a novel coronavirus or a wide-scale influenza outbreak.

The publicly available plans emphasise that predicting the length, severity and impact of a coronavirus – such as SARS-CoV-2 – outbreak is difficult, given a large number of unknown and variable factors.

“The impact of a pandemic depends on how sick the virus makes people (clinical severity), the ability of the virus to spread between people (transmissibility), the capacity of the health system, the effectiveness of interventions and the vulnerability of the population,” the New South Wales government’s human influenza pandemic plan says.

“As humans will have little or no pre-existing immunity to a pandemic virus and influenza viruses can be transmitted among people without symptoms, prevention is not considered realistic.”

But the NSW Health plan makes a number of fundamental assumptions about a pandemic outbreak in Australia:

Australia is maintaining a travel ban on visitors from the Chinese mainland.

“As infected travellers may have no symptoms on their arrival into Australia, border screening of incoming passengers is unlikely to be of benefit in preventing a pandemic influenza strain entering the country,” NSW Health says. 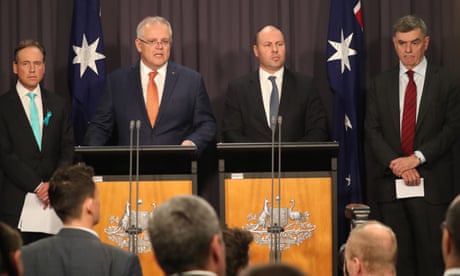 If and as a pandemic worsens, contingencies could see the ordering of schools closed and of public transport altered in order to implement social distancing measures. Mass gathering events, such as sporting events or concerts, may be cancelled.

People may be advised – or even ordered – to work from home if possible.

People will be forced off work if they are ill, to care for family members, or by advice – or orders – to self-isolate.

Hospitals may need to set up screening stations outside emergency departments and designate specific “flu areas” within hospitals to ensure coronavirus patients are isolated from others. If hospitals are overrun, operating theatres or general wards could be requisitioned as intensive care surge areas and children may be able to be treated and managed at adult hospitals.

“Overflow facilities are used to accommodate patients when it is impractical to manage them at home or in a hospital,” NSW Health says. “Healthcare facilities, including private hospitals, would be used preferentially. However, schools, warehouses, convention centres, hotels or sports arenas may be alternative sites.”

Speaking at the Royal Children’s hospital in Melbourne, Victoria’s chief health officer, Dr Brett Sutton, said authorities were working on the basis that a coronavirus pandemic was inevitable.

“I think it’s much, much safer that way,” Sutton said. “We have to proceed with planning on the basis it is inevitable and we can and should expect more cases in Australia in the coming weeks or months. I don’t want to see us get caught out at all.”

Sutton said hospital contingency plans would adapt depending on the severity of the outbreak.

“That might look like cohorting where you have a respiratory ward for coronavirus patients in hospitals,” he said. “It might have a separate stream for emergency department patients.”

There is currently no vaccine for Sars-CoV-2 – the novel coronavirus that causes Covid-19 – but work is under way to develop one. Note that the World Health Organization says a coronavirus vaccine is 18 months away

In the event of a severe pandemic outbreak, police forces may be drafted in to protect key medical supplies, with responsibility to “plan and implement security of the national medical stockpile and state medical stockpile … of anti-influenza medicine and personal protective equipment”.

Social distancing strategies, voluntary at first but enforced if necessary, could be implemented across the country. That might include quarantine in designated secure sites (such as the Manigurr-ma village in the Northern Territory); home isolation; exclusion, where people are asked to exclude themselves from childcare, school, educational facilities, workplaces and other activities; or closures of schools and other organisations.

Coronavirus: country comparisons are pointless unless we account for these biases...

Three reasons why Jacinda Ardern’s coronavirus response has been a masterclass...

With the persecution of Collaery ended, it’s time to hold the perpetrators to account