The CSIRO has found serious flaws in Adani’s key water management plan to protect an ancient springs complex near its proposed Carmichael coal mine, threatening to further delay the controversial project.

The ABC can reveal Australia’s peak scientific body has raised concerns about Adani’s Groundwater Dependent Ecosystem Management Plan (GDEMP), which is designed to minimise impacts on ecosystems including the nationally important Doongmabulla Springs.

The Federal Department of Environment and Energy asked the CSIRO and Geoscience Australia for an independent scientific review of Adani’s GDEMP.

The ABC understands one of the CSIROS’s key concerns is the level of groundwater draw-down that could be caused at the springs by the mine’s operations.

The Doongmabulla Springs complex is regarded as one of the world’s last pristine desert oases. (By Tom Jefferson (Lock the Gate))

Conservationists and some scientists warn the springs could permanently dry up under Adani’s plan to drain billions of litres of groundwater a year for its proposed mine.

The source of the ancient springs remains in doubt

The GDEMP is a requirement of the Federal Government’s final approval and also needs to be ticked off by the Queensland Government.

Other concerns include the possible groundwater impacts from Adani’s water bores at the mine site.

The CSIRO also found that some of the data used by Adani in its plan was not verified.

The CSIRO has told the federal environment department that Adani needs to do more work on its GDEMP and to verify its data.

The ABC understands Queensland’s Department of Environment and Science (DES) wrote to Adani last week saying it will not look at the company’s GDEMP again until the concerns raised by the CSIRO are resolved.

In August the ABC revealed the mining giant’s most recent draft plan to protect the Doongmabulla Spring failed to address regulator demands to protect the oasis.

“The GDEMP needs to identify the source aquifer of the Doongmabulla Spring Complex and mitigation measures to protect the springs,” the DES told the ABC in statement.

“Preliminary advice from CSIRO requires Adani to update the plan.

“Two environmental plans still need to be approved before significant disturbance can commence at the Carmichael Coal Mine.

“The Queensland Government has been clear that the [mine] project must stack up on its own merits, both financially and environmentally.”

Last month Adani announced construction would begin on the Carmichael mine, with company chief executive Lucas Dow saying the project would be “100 per cent financed” from within the Adani conglomerate.

But the mine would be significantly scaled back, with production expected to peak at 28 million tonnes compared to the projected 60 million tonnes under the original plan.

Adani told the ABC that it welcomed the review from the CSIRO.

“Receiving feedback on management plans and working through that with regulators is a normal part of the approvals process for any resources project,” an Adani spokesperson said in a statement.

“We have been assisting with and welcomed a review by the CSIRO as we are committed to working transparently and to the same standards that are in place for other Australian mines.

“In fact, Adani’s Groundwater Dependent Ecosystems Management Plan has been through 10 rounds of assessments with the Australian and Queensland Governments over two years.”

Adani has been ordered to pay almost $12m owed to engineering firm AECOM for work on a scrapped rail line to the Carmichael coalmine.

A judgment in the Queensland Building and Construction commission details how “payment difficulties” emerged in a contract between AECOM and an Adani subsidiary company. The 1,862-point commission adjudicationsays Adani had “anticipated” receiving government support that did not materialise, including a $1b federal loan to build the rail link between Carmichael and the Abbot Point port.

The loan was vetoed by the Queensland government in November last year. The contract to design the rail line was suspended about six months later.

Soon after AECOM lodged a claim with the QBCC alleging it was owed $20m for the work. Adani countered by offering $325,000. 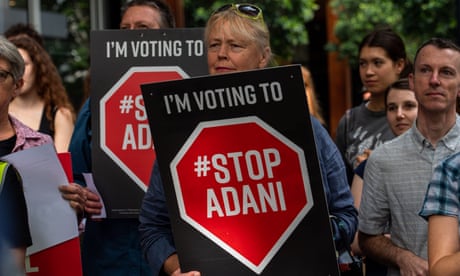 The QBCC this week issued a detailed mixed ruling that Adani owes AECOM about $12m, plus interest. The ruling also reveals how the rail line, which has since been abandoned, suffered a series of setbacks.

These included Adani being unable to provide AECOM with access to properties to undertake design work, “expected government relaxations that did not materialise” and the veto of a loan from the Northern Australia infrastructure facility.

“[AECOM] argued that these difficulties resulted in delays … [and] a substantial change to [Adani’s] project delivery strategy, resulting in the suspension of the claimant’s services,” adjudicator Chris Lenz said.

Adani had previously said the Naif loan was “not critical” to its project. As the rail project struck “difficulties”, Adani was unsuccessfully attempting to find outside finance for the Carmichael project. Eventually the company changed tack, downscaling port, rail and mine plans and cutting costs to an extent it can self-finance Carmichael.

It announced last month Carmichael would go ahead without external finance, and that works at the site in the Galilee Basin are imminent. But several key approvals and processes remain outstanding; including some which will not be finalised by the federal election. Adani has sought to frame those approvals as formalities, and can undertake some works before those approvals being granted.

A recent federal court decision means a full-bench appeal by traditional owners, members of the Wangan and Jagalingou family council, will likely be heard in May next year. The Queensland government is understood to be waiting until the outcome of that case before extinguishing native title at the Carmichael site.

Guardian Australia has previously reported that access discussions with rail network operator Aurizon will likely take until September, and that those negotiations will need to settle who pays for line upgrades worth at least $100m.

Management plans for groundwater have not been approved. A recent government report said cumulative water impacts in the Galilee had been understated, and the ABC reported this week the CSIRO had flagged concerns about Adani’s groundwater dependent ecosystems management plan, which the Queensland government must approve, and for which there is no statutory timeframe.

No significant ground disturbance can occur until the groundwater plan is approved.

Adani said in a statement it had invested $3.3bn in its Australian businesses, “a clear demonstration of our capacity to deliver a financing solution for the mine and rail project, as well as meeting all financial obligations”.

“In September we announced a new narrow-gauge railway design solution for the Carmichael project to accelerate the delivery and reduce capital costs. We have already secured the necessary approvals and land-access agreements with landholders needed to build the line.

“We are working through [the] regulatory process with the network owner and once it is complete we will commence construction of the rail line.”

The meetings occurred between 7 May and 7 November this year and were tabled by the department in response to questions on notice from the Greens senator Larissa Waters.

Waters had asked at an estimates hearing in October if the department, minister or assistant minister had “met with Adani representatives or lobbyists in the past six months”.

She said on Tuesday the number of meetings suggested the department was “holding Adani’s hand through the approvals process”.

The number of meetings was evidence of the “cosy relationship” Adani had with the federal government, Waters said.

$3.2bn asset and internationally significant wetlands are being managed by handshakes, winks and nods.”

The commonwealth faces “unique fraud risks” arising from its management of the $3.2bn portfolio of environmental water in the Murray-Darling Basin, an internal audit has found.

The audit, written by Ernst & Young, and previously withheld from the public, found the Commonwealth Environmental Water Holder (CEWH) and the near $3.2bn worth of water it controls, was at risk of being defrauded by state agencies, individual officers within those agencies and private landholders.

Despite finding serious risks to a major commonwealth asset, the report was only released through Senate processes instigated by the Greens senator Sarah Hanson-Young and the Centre Alliance senator Rex Patrick.

The report highlighted that the CEWH relied on its state counterparts to deliver water outcomes but sometimes the outcomes desired by the states did not align with those of the commonwealth and the Water Act.

$3.2bn asset and internationally significant wetlands are being managed by handshakes, winks and nods.”