Adani gives itself the green light, but that doesn’t change the economics of coal 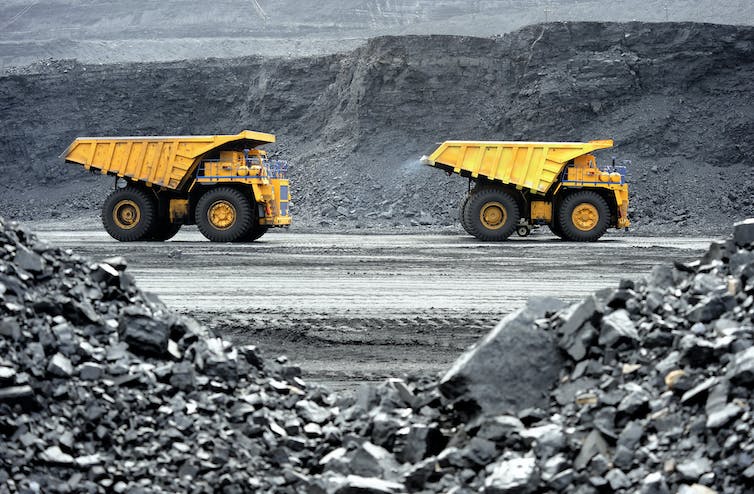 Is it nearly the end of the road for coal?

Indian mining firm Adani yesterday announced that its board had approved plans to proceed with the controversial Carmichael coal mine in Queensland’s Galilee Basin.

But it is still far from clear whether Adani has actually obtained the finance to proceed with the A$16.5 billion project, or whether it has secured the necessary A$1.1 billion loan from the government’s Northern Australia Infrastructure Facility needed for the mine’s railway.

Tony Abbott created the NAIF prior to losing leadership

Ministerial responsibility for the NAIF lies with the Hon Barnaby Joyce, Deputy Prime Minister, Minister for Agriculture and Water Resources, Minister for Resources and Northern Australia. NAIF is led by an independent board chaired by Ms Sharon Warburton (WA) who is joined by:

The NAIF offers up to $5 billion over 5 years in concessional finance to encourage and complement private sector investment in infrastructure that benefits Northern Australia. This may include developments in airports, communications, energy, ports, rail and water.

That hasn’t stopped the state government hailing the announcement as an economic win for Queensland, on the basis of job creation and for the signals it provides to potential investors in the region. But this amounts to little more than short-sighted politics. The government appears to be steadfastly ignoring the realities of the current energy landscape.

Let’s recap: coal mining is not economically viable within the constraints of a global carbon budget, while renewable energy production is rapidly expanding as the world moves to more sustainable investments. The result is that coal projects could become stranded assets, with price tags that may already exceed what would have been the costs of a timely implementation of climate action. Investors and lending institutions are shifting to sustainable projects that limit the risk of catastrophic environmental damage.

The people own the coal

Issuing resource titles that allow Adani to proceed with a vast coal mine – in defiance of the social, economic and environmental impacts of such a project within a carbon-constrained economy – arguably represents a dereliction of the state’s duty to act in the public interest.

It also ignores the fact that in order to have just a 50% chance of keeping global warming within 2℃, a key aim of the Paris climate agreement, 90% of Australia’s current coal reserves must stay in the ground. If the mine proceeds, it will contribute substantially to global warming and accelerate the destruction of one of the world’s greatest natural assets, the Great Barrier Reef. This could have huge knock-on effects for future tourism in the area, which generates A$6 billion a year.

The economics of the Adani coal mine simply do not make sense. While there may be limited short-term employment opportunities and royalty gains for the state should the project actually get financed, the longer-term projections are dire.

The thermal coal market is in decline. What’s more, the Carmichael mine will produce low-ranking thermal coal with a high ash content, making it carbon-intensive even by coal’s standards, and bringing with it considerable health risks.

With this in mind, it seems short-sighted to subsidise an anticipated production of between 25 million and 60 million tonnes of coal a year. Put simply, coal is not a sustainable resource for energy production.

This climate perspective informs the market. India, for example, cannot be relied upon as a guaranteed market for this low-quality coal. This is particularly evident in the recent unveiling of India’s new power plan, which calls for a dramatic increase in renewable energy production. This will have a deleterious impact on all Australian coal markets, and makes the decision to pursue low-quality coal reserves all the more untenable.

The banks know this. Westpac, ANZ, NAB, Deutsche Bank, HSBC, Barclays, Royal Bank of Scotland, Morgan Stanley, JP Morgan Chase, Goldman Sachs, Citi, BNP Paribas, Société Générale and Crédit Agricole are among the domestic and international banks that have declined to fund the project, while the Commonwealth Bank has quit as the project’s financial adviser.

This is why the question of financing is so fraught. The major banks understand the fact that longer term, the Adani coal mine has no future. They are also concerned about the financial impact of stranded assets. Westpac, for example, made it very clear earlier this year that it aims to shift lending to sustainable economic models, and would increase lending to this sector to A$25 billion by 2030. It also made it clear that any funding for coal projects would henceforth be limited to existing coal projects with high-quality coal. Other major banks have adopted similar stances.

So what happens now? The government may decide to fund Adani’s railway, but that does not necessarily mean the mine itself will ever actually move forward.

If and when Adani’s project does fall over, consideration should be given to whether the government should be held accountable for breaching public interest responsibilities in issuing the resource titles in the first place. Of course, this necessarily presumes the financing for the Adani mine will actually proceed.

To reiterate, there is no evidence that this has actually occurred. Getting government approval, and a green light from one’s own board, does not mean that Adani actually has the funding required to go ahead and dig the coal.

In the end, the real question is whether any lending institution will seriously take a risk on this vast and irresponsible project, which ignores both the safety of the Great Barrier Reef and the fundamentals of carbon-constrained economics.

Bob Lee - Modified date: September 29, 2019 0
Viewpoint: What's in half a degree of climate change? Our dual needs to save the planet and power our modern lives have thrown a spotlight on...

Australia is missing out on tax revenue from gas projects

Why businesses want the ear of government and are willing to...

A cheat sheet for reading the federal budget

Three claims used to justify pulling codeine from sale without a...

The public should be ‘shocked, dismayed and disgusted’ at the major...

The Murray Darling Basin Plan is not delivering – there’s no...