PIGSFLY NEWSPOLITICS AROUND THE GLOBE
More
Home POLITICS The prime minister is wrong to pretend that it’s the economy’s loss...

Scott Morrison thinks cutting taxes is 'economics 101'. As an economist, I beg to differ
Richard Denniss

Over the past 25 years, I have taught countless courses on introductory economics for undergraduates, postgraduates and even senior bureaucrats, and I confess that not once have I taught the “lesson” that collecting taxes weakens economies. In my defence, I have never read such a statement in any economics textbook I have used. 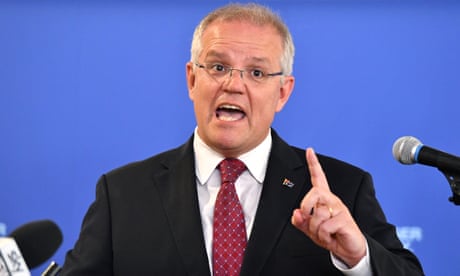 It gets worse. I have actually taught thousands of students that collecting more tax revenue can increase the efficiency of the economy. But again, I can rely on textbooks in my defence. For while introductory economics textbooks contain no chapters on why taxes apparently weaken economies, they almost always contain a detailed description of why taxes are an efficient instrument for reducing the things we don’t want – everything from cigarettes to pollution from coal-fired power stations.

The main lesson from economics 101 – indeed from the entirety of economics – is actually quite simple. The foundational principle of mainstream economics has nothing to do with money, taxes or even markets. On the contrary, the foundational principle of orthodox economics is the concept of “opportunity cost”, which simply states that every time we consume resources to produce one thing we give up the opportunity to use those resources to produce other things.

While economic debates are typically quite theoretical (which is the academic word for ideological) there is nothing at all theoretical about the current debate on our federal government’s taxing and spending policies. Bill Shorten’s ALP are promising to close tax loopholes, collect tens of billions of dollars in additional revenue and spend tens of billions of dollars more on health, education and infrastructure. Scott Morrison wants to cut the company tax rate, leave all the loopholes as is, and gradually cut spending on services and welfare.

There are clearly opportunity costs associated with both the government’s and the opposition’s plans. There is no doubt that if the ALP succeeds in abolishing cash refunds for so-called spare dividend imputation credits, Australia’s wealthiest retirees will have 5.6 billion less opportunity to spend money on their lifestyle or that of their grandchildren. And there is also no doubt that if the Coalition manages to implement its next round of company tax cuts that future governments will have less opportunity to invest in hospitals, schools and high-speed rail.

There is nothing in economics 101 to help us decide whether we should invest additional resources in the production of more schools, or the production of more shoes. On the contrary, the textbooks are usually quite clear that it is up to us to make such decisions and that there is no right answer. Economists don’t know whether you want lower taxes and poorer quality services or higher taxes and higher quality services, any more than they know whether you prefer to go camping or on a cruise for your holiday.

Economists like myself tend towards the libertarian end of the spectrum precisely because our training instils in us the sense that individuals are usually the best judge of what they want for lunch, what they want to wear and whether they want a bigger retail sector or better quality essential services.

But the libertarian instinct of most economists, and most economics textbooks, in no way leads to the conclusion that taxes are bad. On the contrary, economics 101 makes it clear that collecting more revenue from something that causes harm (like coal) and spending that money on something that causes good (like education) will simultaneously help the economy, help the environment and make people happier. It’s a win-win-win.

Somehow the conservative politicians that tend to lean the heaviest on their alleged skill in “economic management” escape scrutiny as to why they are so determined to ignore the straightforward economic advice that taxing pollution is about the easiest thing a politician can do to improve the wellbeing of their citizens.

Economics is not about money, taxes or GDP, it’s about the consequences of choices. Just as most people accept there is no “right answer” to when it is best for parents to return to work after they have kids, when it is a good time to cease treatment for cancer, or whether camping is more fun than glamping – there is no “right answer” to whether we should spend more, or less, on public services.

Scott Morrison is right to claim that if we close tax loopholes, high-income earners will have less money to spend on the things they like to spend their money on. But he is wrong to pretend that their loss will be the economy’s loss. Just as a carbon tax would reshape our energy system, closing tax loopholes and spending more money on health and education will reshape our economy.

Economics is no better placed to advise citizens on whether they should buy high-quality health and education services or high-priced cars and coffee. But conservative politicians often prefer to conceal their personal preferences for lower taxes behind a cloak of supposed economic necessity. As Margaret Thatcher – the mother of this political strategy – said more than 30 years ago:

What’s irritated me about the whole direction of politics in the last 30 years [she spoke in 1981] is that it’s always been towards the collectivist society. People have forgotten about the personal society. And they say: do I count, do I matter? To which the short answer is, yes. And therefore, it isn’t that I set out on economic policies; it’s that I set out really to change the approach, and changing the economics is the means of changing that approach. If you change the approach, you really are after the heart and soul of the nation. Economics are the method; the object is to change the heart and soul.”

Australia is one of the richest countries in the world. Our GDP is the size of Russia’s and, just like our taxes, our public debt is among the lowest in the developed world. We can choose to cut our taxes further if we want, but if we do so the “opportunity cost” will be the opportunity to provide higher quality services to all Australians. Arguing that cutting taxes is necessary and efficient is a move straight out of Thatcher’s playbook, but support for that choice can’t be found in any economics textbook.

• Richard Denniss is chief economist for the Australia Institute. His new book, Dead Right: How Neoliberalism ate itself and what comes next, is released 11 February

How to make Australia richer

History repeats: how O’Farrell and Greiner fell foul of ICAC

Facebook to pay millions of pounds more in UK tax